How can we help you?

How to import and export with Excel

Nobody loves a spreadsheet. But sometimes Excel is just the right tool for the job. For instance, you might want to exchange information with people outside your organisation, who don’t have access to Movida. For those occasions, Movida has powerful Excel import / export functionality. Here is a guide to help you make the most of it.

About IDs and External IDs

First, a few words on identifiers (IDs). Most things in Movida can be identified by:

ID and External IDs can be recorded in Movida:

Now, let’s use Movida’s Title Import functionality to add new titles to the Movida catalogue, in bulk. Go to the “Catalogue” page, click the “Create or Import” button, and choose “Import Titles”. 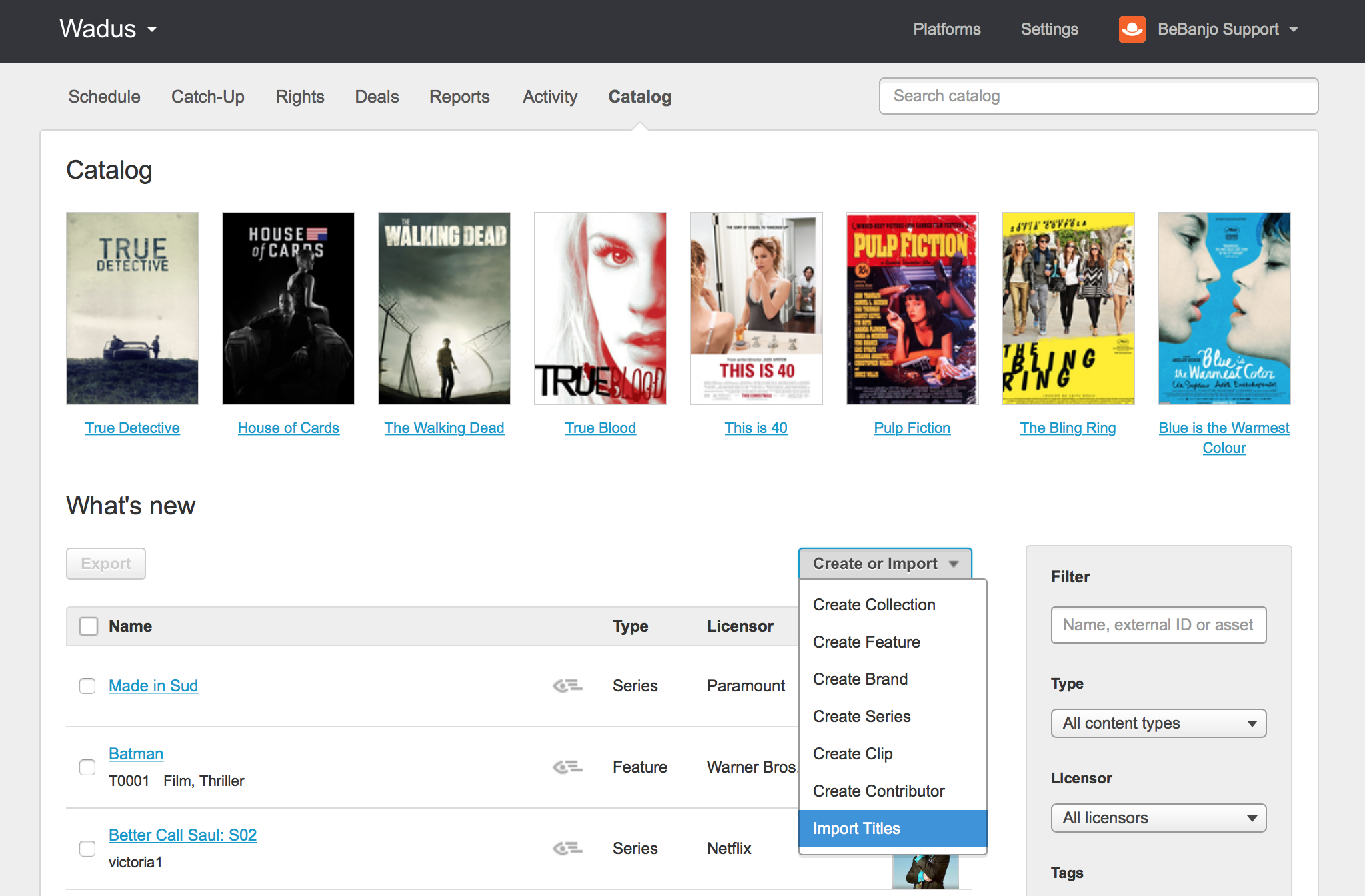 From this page, click “Download example file”, and you’ll get an Excel spreadsheet template. It contains a set of standard columns named: Type, ID, External ID, Name, Episode Number, Brand ID, Brand External ID, Brand Name, Series ID, Series External ID, Series Name, Season Number, Licensor, Tags, etc… The spreadsheet also contains other columns, that are specific to how Movida was configured for your organisation. So you may find columns such as: Synopsis, Genre, Category… and all the other metadata fields you see when you look at a title’s metadata in the Movida catalogue. 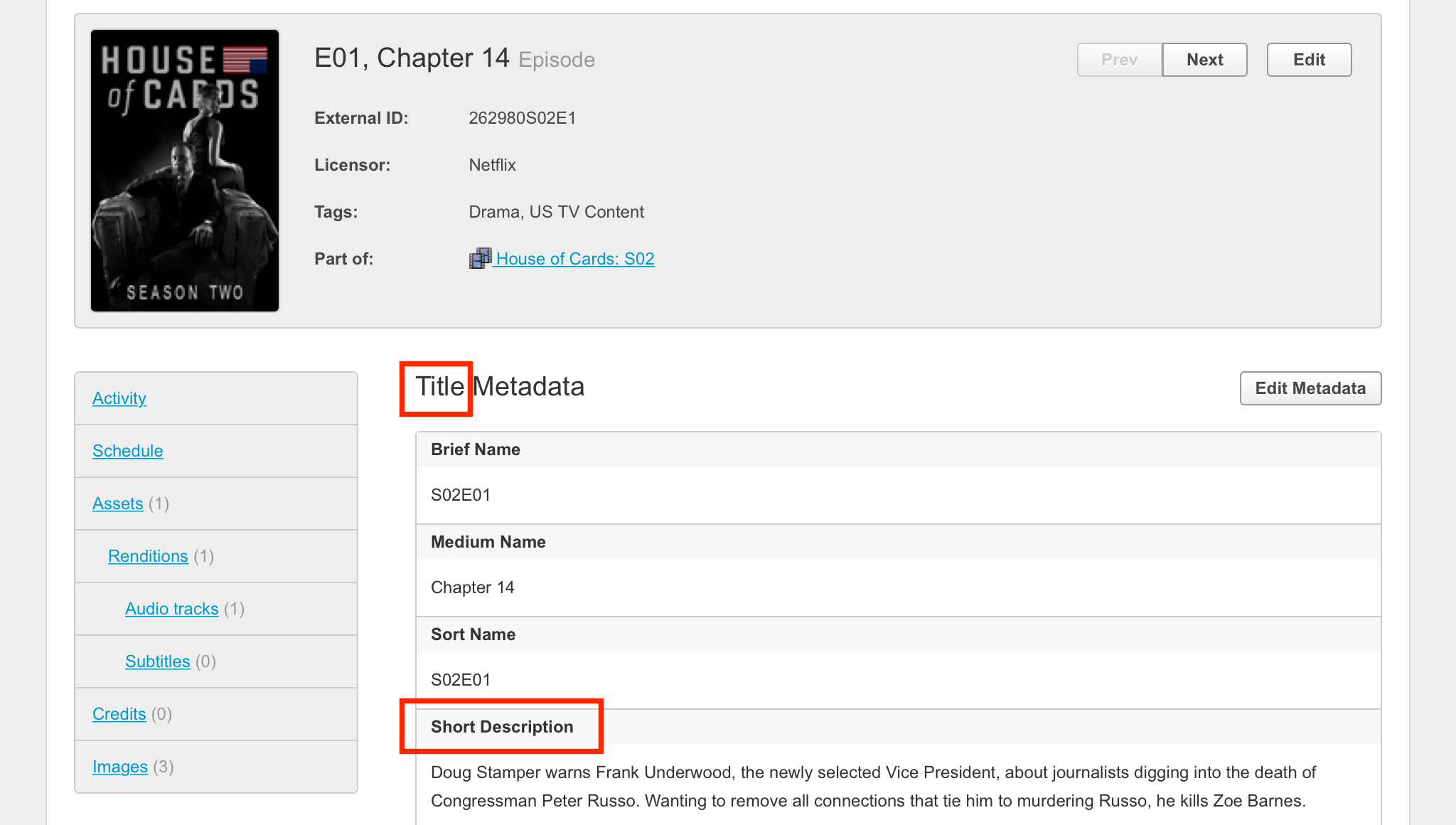 Now, let’s fill in the spreadsheet with the details of a few new titles: Alien, Aliens, Alien 3, and Alien: Resurrection. Note that we leave the ID fields empty: it’s up to Movida to automatically generate its internal IDs. However, we can set the External IDs of our choice. It’s not required to do so but it can be useful; we’ll see why later.

And our new titles have been created in the Movida catalogue!

Sometimes, the Excel import will fail. For instance, it is required that you fill in the type column for every title you import, and you must set its value to either feature (for films) or episode. If you forgot to fill in the type column or put a random value there, the import will fail. Similarly, if you have metadata fields that appear as drop-down menus, then the Excel import will only accept the values set in the drop-down menus. This ensures the good quality of the metadata in your account.

What happens when we put in incorrect data in our spreadsheet? Let’s try with this example where the type of one of the titles has been left empty.

After importing the spreadsheet, Movida flags the error: 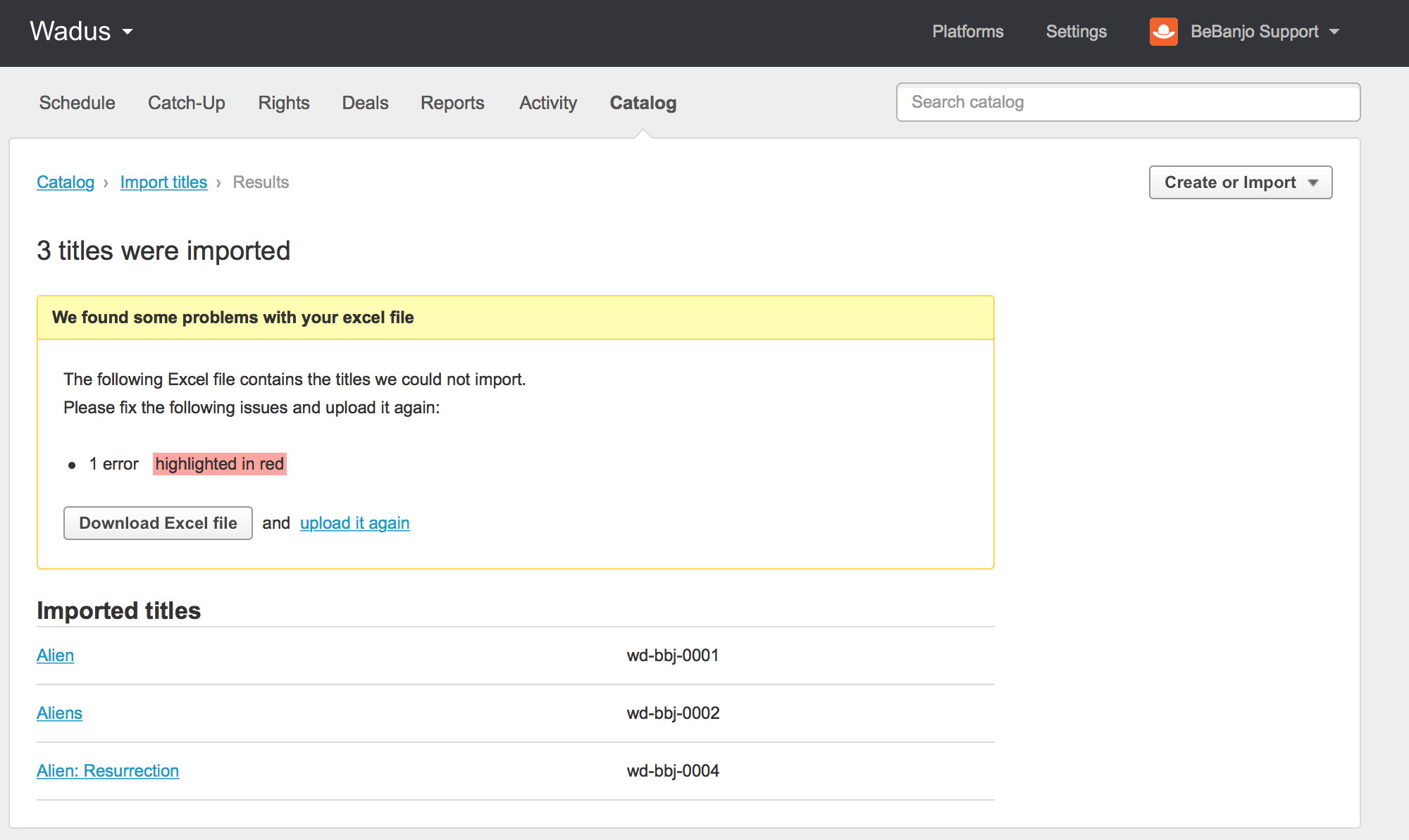 The Excel import functionality can be used, not only to create new titles, but also to update existing titles. Let’s change the Licensor for all the titles in our spreadsheet:

Let’s import it: Movida does not create new titles, but instead updates the existing titles with the amended Licensor information.

How does Movida recognise we’re talking about existing titles? Because we’ve used the same External IDs we had used when creating the titles initially. This is how handy External IDs can be.

When updating titles via Excel import, Movida will ignore the cells you leave empty. So, for instance, if you leave the Synopsis column empty for a title that already has a Synopsis, then Movida will not delete the existing Synopsis. That’s very handy too: you only need to update in Excel the fields you want to modify. You don’t need to fill in the rest.

Some metadata fields can accept, not just one, but multiple values. For instance, a film may have the followings genres: Science Fiction and Horror. To import that information, simply have multiple columns in you spreadsheet, all with the same column heading named Title:Genre (assuming you have a Title:Genre metadata field configured in your account).

The only exception is the Tags column which accepts multiple values as comma-separated lists, like in the example below.

There are two ways to export information out of Movida in the Excel format. The first one is called the catalogue export.

Search for some titles in the Movida catalogue, using the simple search box in the top-right of any screen. On the results page, select the titles you want. The shortcut link (e.g., Select remaining N results?”) makes it easy to select all titles in one click. 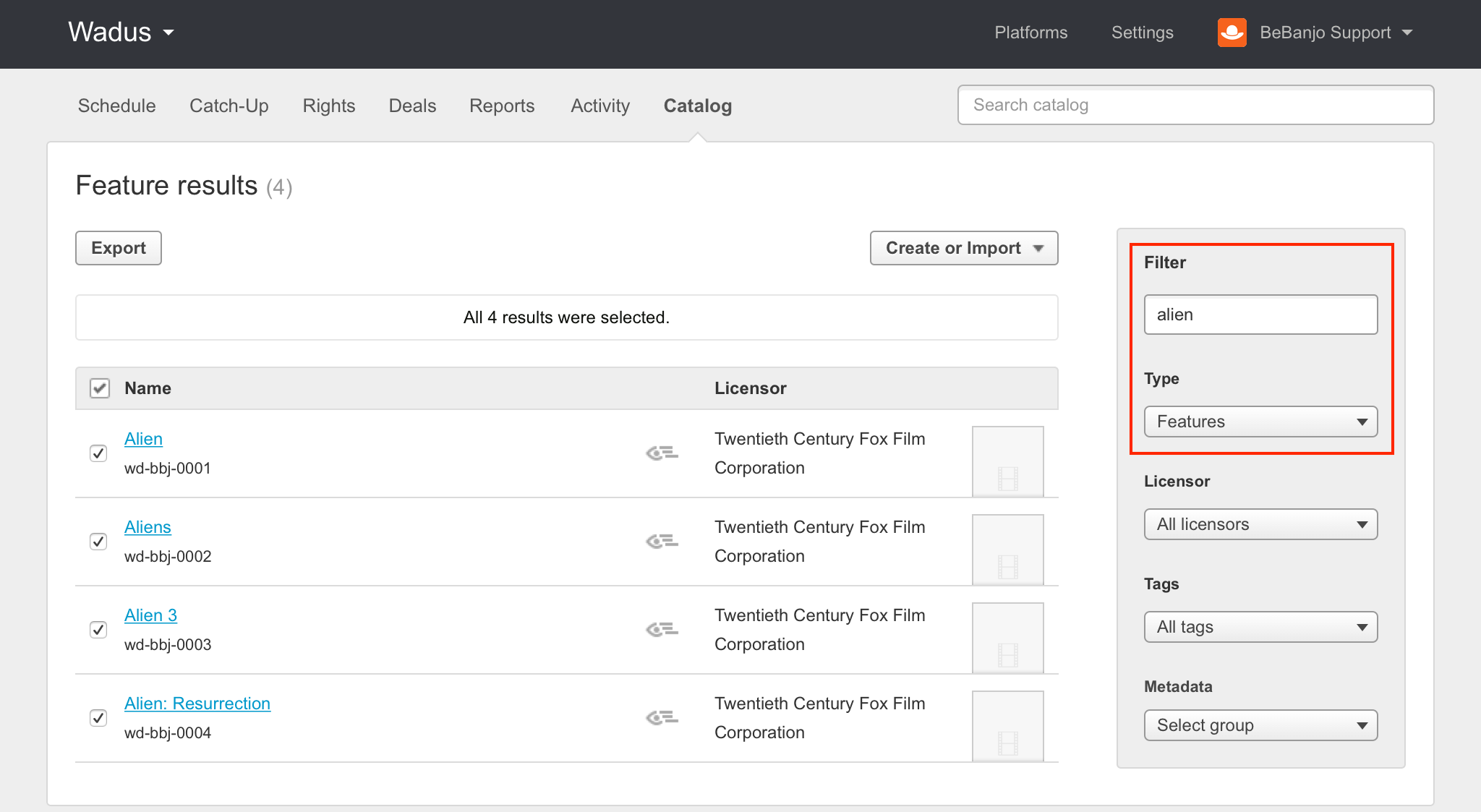 Then click “Export” and Movida will produce a spreadsheet with all the metadata for the selected titles. You will be prompted whether you want to export all the metadata available, or just a specific subset.

The second way to export data is called the schedule export, and gives you access to not only title metadata, but also to scheduling information.

Go to the Schedule page of Movida, and filter it (by time period, by licensor, by platform…) to see the view you’re interested in. For instance, let’s see all titles going online in August on our iOS service. 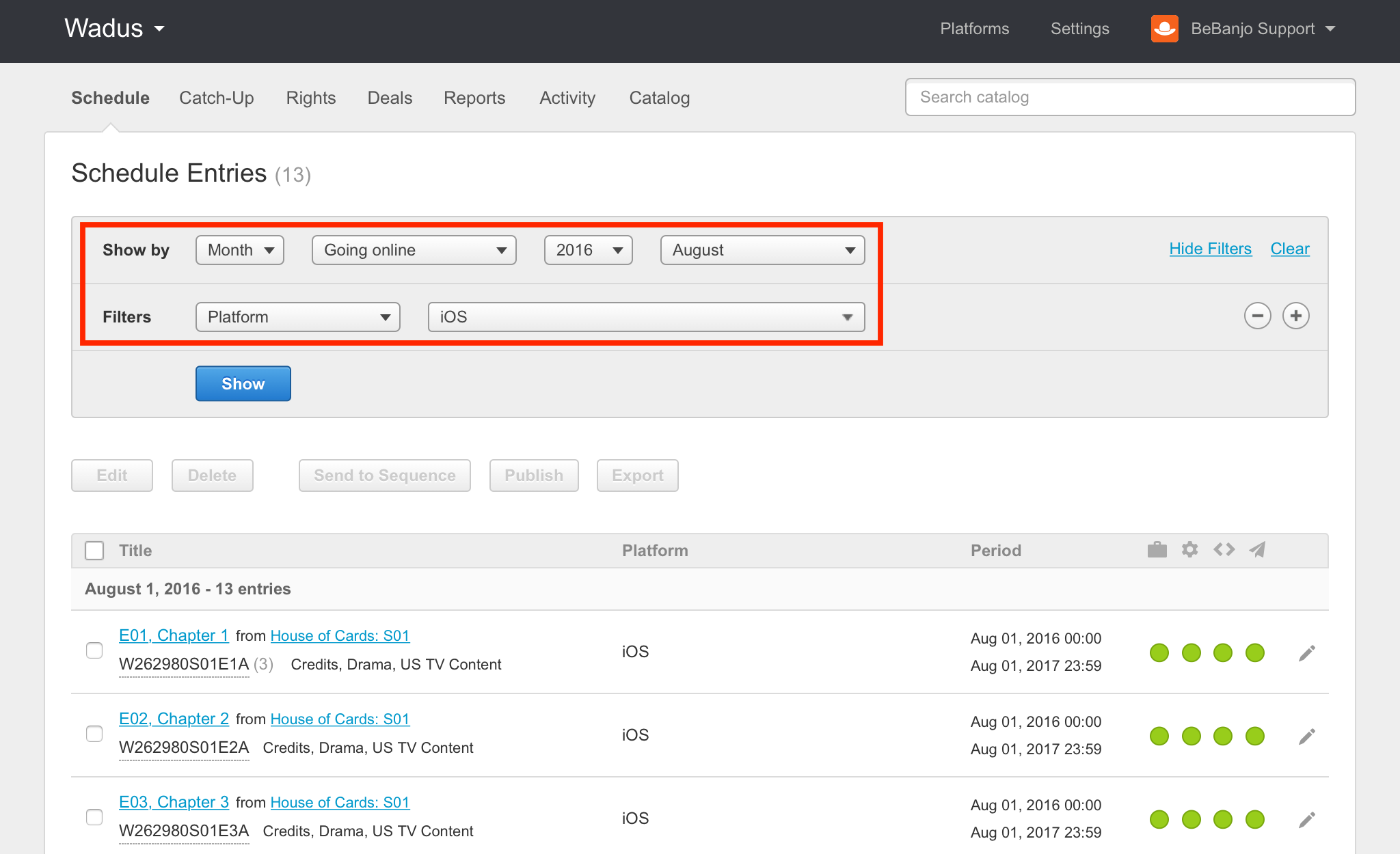 Select the titles you’re interested in (again, the shortcut link makes it easy to select all titles in one click) and press “Export”. Again, the drop-down menus that appear then allow you to select what information you want to export. You may want all schedule and metadata information, or you may be interested in just a subset.

If you’ve chosen to download schedule information - as well as metadata - then the platform, put up and take down columns in the Excel schedule export give you just that.

Export and import work nicely together

When you download an Excel export, you’ll notice that the ID columns contain the IDs that Movida automatically generated when creating the titles. So we can:

Movida will recognise that we are updating existing titles, not creating new ones. This is very useful. It allows you to quickly make complex updates in bulk, even if you don’t use External IDs.

Also, if you need to create or update a large amount of content we recommend that you remove any unnecessary metadata columns from the Excel document (i.e. columns whose values you’re not making updates to).

We use cookies (just for analytics) on this website. If you continue we will assume you are happy with it.